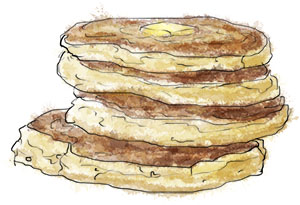 We were in a diner somewhere in the sprawling vastness of Los Angeles, the morning after my school-friend Yoo Na’s wedding; a group of Brits, nursing hangovers and jet lag, recovering from the excitement of the festivities (and an exhausting day at Disney, Happiest Place on Earth) in need of a sustaining breakfast.

We ordered pancakes and coffee, and Euan plumped for a large coke.

The waitress was straight out of a 1960’s sit com, all beehive hair and pink acrylic nails and perkiness. She bustled away, back chatting with the regulars the whole while, and returned in mere moments with plates that looked as though they had been designed by a toddler with a penchant for stacking blocks. The pancakes teetered vertiginously, surrounded on all sides by strips of bacon like the supporting struts of a tee pee. We admired them, momentarily floored. Where would we ever start with this unbelievable mountain of sweet-scented food?

But start we did, and, somehow, finish. Lick the plate finish in fact. Because the pancakes were delicious. Everything that you could want from an American pancake. A buttermilk tang, a pillow-y texture, a golden carapace, a fluffy interior, a generous soaking of maple syrup. We ate in blissful silence.

Then the waitress topped up our coffees and filled up Euan’s coke.

Having lived in New York for a while now, it’s hard to remember that feeling of incredulous delight. Of course we got a coffee re-fill. Of course it was free. Of course it was. But back then, we had barely even heard of such a thing.

“A free refill of coke?” Euan was incredulous. “Totally free?”

“Yes,” said the waitress patiently “of course. As many as you like.”

He took a long and reflective sip.

“This is it,” he announced to the table. “We are living the American Dream!”

My quest for the perfect buttermilk pancake is an on-going delight, but the recipe I turn to time and time again is a variant of Martha Stewart’s classic.

She melts butter on her griddle before cooking the pancakes. I don’t have a griddle, only a frying pan, and somehow the butter seems to burn before the pancakes are cooked, so I cook mine in a drop of vegetable oil.

To make chocolate buttermilk pancakes, which are totally worth trying some time, take out a tbsp of flour and replace with a tbsp of coco powder

Martha stipulates that the batter will make 9 6 inch pancakes.

I tend to make smaller pancakes – 2 inches across, which is about 1tbsp of batter. I get about 25. They can be kept in the fridge and re-heated. I’ve tried freezing them and that works too as long as you heat from de-frosted rather than from frozen, but honestly, they’re better fresh. 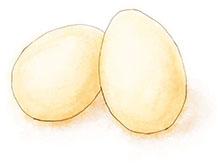 This entry was posted in The Monday Treat and tagged American Dream, bacon, buttermilk, egg, flour, pancake. Bookmark the permalink.