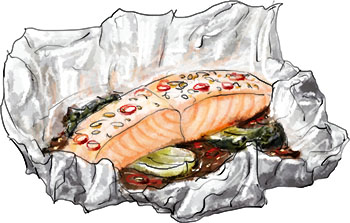 I can put my finger on the exact moment where Thanksgiving related food stopped being appealing: Friends Ken and Carrie invited us over for dinner and a game of cards, and I gave in to uncouth temptation and drank a tablespoon of the Asian dipping sauce that accompanied the pot stickers.

And still, my salt/sharp craving was not sated.

So this is what I made when I went over to Sara’s apartment to see and indeed to watch her brand new Black Friday sales flat screen television.  We settled in with noodles and Netflix as Poirot solved mysteries in 34 inch HD. “Who says things can’t make you happy?” said Sara.

Quite a shot in the arm for Capitalism in a month where it’s been about as popular as a hedgehog in a balloon factory.

If You Can Make That You Can make This

4 Responses to The Monday Treat – Ginger Salmon with Bok Choi