This Dinner Will Get You Laid – Maple Marinaded Steak Sandwiches, post playing games with girls 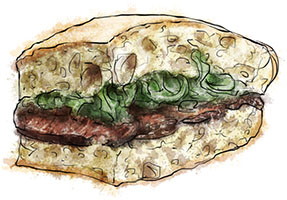 I have a friend who lives in Brooklyn, works as a designer and collects vintage T-shirts. Like it or not, he’s what is known as a hipster, and he has the customized converse shoes to prove it. This friend took my husband out for a boys only evening of retro computer games and locally brewed beers at Barcade.

â€œIt was such a great night!â€ enthused Jon. â€œWe played Frogger. Actual original Frogger. People fly all the way from Japan just to play Donkey Kong and get the high score that they write on a chalk board above the bar.â€

It seemed that from 7 till 9.45 this bar was packed full of guys. They happily played Galaga, and Tetris, and a game called Timber, where they were lumberjacks and each had to fell more trees than the other – â€œhe totally cheated by dropping trees on my head!â€ By 10pm everyone had drunk just enough beer to mellow out a little.

Thatâ€™s when the girls showed up.

â€œLiterally dozens of hot girls!â€ They swarmed into the place at the exact moment when given the choice between another round of Â Astroids and a hook up, the guy would probably take the hook up. These were all 30 something guys with the disposable income to mess around on arcade machines and buy craft beer. Odds on, these were mostly the Geeks Who Conquered The Earth â€“ graphic designers, ipad app developers, people who worked at Google, at Hulu, at Gawker Media.

These women had uncovered a rich seam of exceedingly promising dates.

â€œIt was fun,â€ said my husband, back in Manhattan, eyes full of wonder. Â â€œMostly we talked about Game Of Thrones.â€

But just to be on the safe side, I made maple marinaded steak sandwiches for dinner.

3 Responses to This Dinner Will Get You Laid – Maple Marinaded Steak Sandwiches, post playing games with girls