My friend Dee invited me to be her plus one at the opening of the Churchill exhibit at the Morgan Library. â€œItâ€™s a 2 hour drinks reception and Boris Johnson will be there!â€

The atrium was packed with a fancy crowd including half of the faculty of Cambridge University, and both Churchillâ€™s granddaughter and a bone fide Kennedy, all eating cheese and crackers and having a high old time. â€œThis is great,â€ said Dee making sandwiches out of prosciutto, cheese and grapes. â€œI wonâ€™t need to make any dinner tonight.â€

Boris Johnson was indeed there to make the opening speech, which he did with exactly as much aplomb as anyone could hope for. After bringing up gluttony, smoking and Gallipoli, he cracked a joke about Anglo Saxon versus Romance languages, which got a big laugh.

At this juncture, itâ€™s probably worth mentioning that we were all drinking gin and tonics. 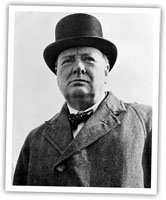 Churchill himself was a big fan of gin â€“ Plymouth Gin to be precise about it. Apparently he believed that passing the cork from the vermouth bottle over a glass of gin was the perfect way to make a martini. I put this theory to Jon upon my return home. â€œHard to argue with that.â€

This chicken is so easy to make, itâ€™s almost not a recipe at all. The gin gives the meat a lovely herbal hit, and makes for a fragrant pan sauce.

A general time line for this dinner:

This entry was posted in This Dinner Will Get You Laid and tagged chicken, dinner party, easy entertaining, gin, olives, party, potatoes, simple ideas, tomaotes. Bookmark the permalink.