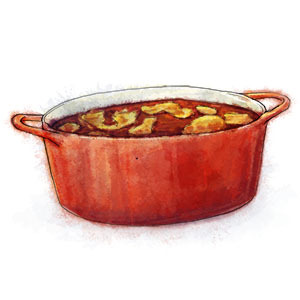 This, from Jeanmarie, who heard it from a man she met on a windy train platform on her commute into the city one early morning.

â€œI met a man who said how much he enjoyed the fall weather every year because it was so different to what he was used to growing up in Guatemala. Then he told me that actually, it was lucky that the weather had been pretty climate where he was from, because a couple of farms in his village were bought by a religious sect that believed in a lot of things, but not in clothing. They were nudists, you see.â€

â€œAnd since it was a small village, when they moved in, they pretty much skewed the majority from clothed to not-clothed. Apparently it caused a lot of scandal at the time. But, the man said, it made him that much more grateful for sweaters now.â€

This is real Sweater Weather food. And it’s quick too: idea of dinner to dinner on the table in half an hour.