After the Americana fest of Labor Day, and with the weather taking a turn away from the brutal to the more civilized, I’m left feeling ever so slightly homesick for an imagined England of afternoon teas on chamomile lawns, of ladies in white dresses and gloves, of PG Wodehouse, and Alice in Wonderland, summer weddings, and tea dances at the Savoy. 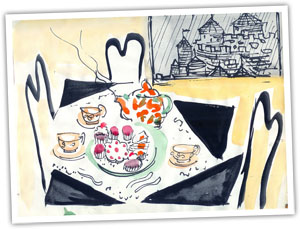 I say an imagined England because I don’t know anybody who regularly sits down to afternoon tea. I suspect that for most of us it is an aesthetic and culinary fantasy, and is in that spirit that I interpret it and bring it into my life.

In order to even think about afternoon tea the question of tea needs to be addressed. 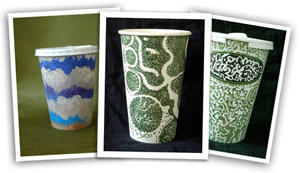 Now people have strong opinions on bag v leaves, and milk v lemon, which I do not intend to stake sides on, but I will say this; hear me, America: tea cannot be made in a coffee machine. The water never gets hot enough. Stop it. Buy a kettle.

You would not believe how few electric kettles seem to exist in New York. I had to go to Brooklyn to buy one. Mostly people have quaint metal stove-top ones that take forever to boil and teeter dangerously on the gas ring. Though not in the physics department at NYU, where in addition to having a supercomputer and a telescope in space, and a detector covering  3000 square km of pampas – and a state of the art coffee machine that takes pods that are currently rarer than blue orchids – there is an electric kettle.

Which would be great, if people could work it.

Jon reports that three string theorists spent ten minutes pressing the button that closes the lid in an attempt to get the power on.

It’s not quite changing a light bulb, but it’s getting close.

Still, it resulted in tea, which is the important thing.

Palmiers are often the shortest distance between wanting to eat a home-baked biscuit and actually getting to eat one.

You can add sultanas to the sugar mixture on the “up” side of the pastry if you like – sultanas soaked in rum are really good – or a cheeky spreading of nutella.

My friend Gwyneth is an artist who takes her afternoon tea (and indeed her morning coffee) very seriously. She started drawing on her paper cups according to the mood of the day and now has a brilliant collection on her blog at www.gwynethsfullbrew.com. I love them because they take something everyday and throw away, and turn it into something special, and not a little whimsical. Very much in the spirit of Afternoon Tea, which invites care and attention and, I suppose, a conscious effort to sit and reflect and replenish and Be Civilized in a frequently chaotic world.

One Response to Afternoon Tea (with Palmiers)