This Dinner Will Get You Laid – Molten Truffle Chocolate Cup Cakes 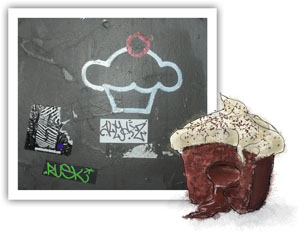 Hot on the quest to change her romantic fate and prove wrong a nay-saying tealeaf reader, Sara attended a speed dating event at a bar on the Upper West Side. Upon returning home she realized that her new dress had been lower cut in real life than it had looked on the hanger, and that she had been showing most of her bra for most of the night.

Possibly as a consequence of this, she received 4 requests for further information.

So what if one of them had listed “snakes” among his interests? She was getting out there. Meeting men. So in the spirit of being open to a relationship, and filled with hope, she arranged dates with all four.

Mr. 1 called off the date with fifteen minutes to spare, while she was pacing outside the café holding a rolled up copy of the New Yorker and feeling as inconspicuous as the Empire State Building. He was held up at work. He promised to reschedule. Sara wasn’t sure if she believed him or not. It could have been a brush off. But if it was a brush off, why arrange a date in the first place? The waitress inside the trendy cupcake café that was doing a cupcake and wine pairing that had recently been featured in Time Out said it was totally a mixed message. It was hard to tell, but it wasn’t necessarily a good sign.

Mr. 2 arranged to meet her at the subway, then took her to this great little place that did cupcake and wine pairings. The waitress raised an eyebrow as she sat down. He had a bit of a squint, and a bit of a bald patch, but he was funny, he was a doctor, and he liked old Hitchcock movies. He was tired of meaningless dating, he said. He was ready for a relationship. He suggested meeting up again. Sara was delighted.

“You are Jewish, right?” he checked.

“But – speed dating on the Upper West Side?”

Mr. 3 was better looking than she remembered, and passed her three rigid dating rules straight off the bat; taller than her, nothing spooky about his teeth, and decent shoes.  He picked the venue.

They drank glasses of red and ate red velvet cupcakes and chatted away easily, well, mostly he told her about how bankers were continually mis-judged and just because a few short traders had fucked up the economy it didn’t mean that he personally had; indeed, the crash had actually been good for people with any idea or skill at investing and he’d done pretty well. When the bill arrived he calculated her half to the nearest nickel, and counted out the exact change. “You can do better” mouthed the waitress, as she gave him change for a five. He left to get home in time for some boxing match on pay per view.

Mr. 4 emailed her at work with a copy of a Time Out review of this great little place that did cupcake and wine pairings. He was chatting to the waitress when she arrived. Actually, deep in conversation with the waitress when she arrived was more like it. He was some kind of music agent and she wasn’t really a waitress at all, she said. She was just doing this to support her fledging singing career and to pay for her dance classes. He said that was fascinating. She hung on his every word.

Sara suggested picking a table and ordering, proving that the answer to the question; How much frosting can one woman take? Is at least one cupcake’s worth more. He suggested sitting up at the coffee bar. The waitress mentioned her passion for 70s funk. He happened to simply love 70s funk. It was the best date Sara had been on, only increasingly it became clear that she was not really on it. He had to take a call from LA and went out onto the street.

“You gonna hook up with any of these guys?” asked the waitress.

Now I’m not usually a believer in cupcakes as the food of love. There’s too kidsy for starters, and a little too Welcome to my 1950’s time portal! But if any cupcake can do it, these babies can. We’re talking deep dark chocolate, an oozing truffle centre, a cool cloud of whipped cream and a dusting of red coco. It’s a cup cake, but strictly for after dark.

These take 5 minutes to make and 15 minutes to bake give or take. You can make them in traditional cup cake (fairy cake) cases, in which case you’ll get a dozen. If you’re using muffin cases you’ll get 8. The deeper the cake is, the longer it needs to cook. For fairy cake cup cakes you’ll need to check after 12 minutes, and muffin sized might take as long as 20. You want to get them out of the oven as soon as the top of the cake is dry. You can also bake these as more of a molten chocolate dessert, straight into a well buttered muffin tin. 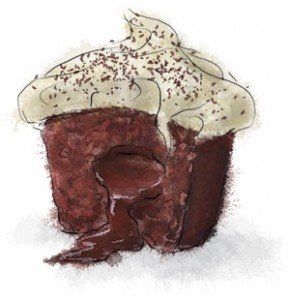 This entry was posted in This Dinner Will Get You Laid and tagged chocolate, cream, cupcake, Sara, truffle. Bookmark the permalink.