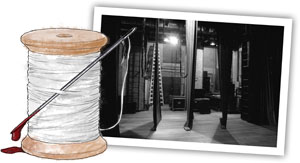 I read somewhere that in New York City the present is so powerful that the past fades away and is lost, but not so for my friend Bob the costume man.

“I’ve been on Broadway since Cats was Kittens,” he told me, “and obviously I’m only a few hours younger than God, so I have seen a few things, you’d better believe it.” His needle moved in and out of the fabric, stitching on the buttons that were his final task of the afternoon, so we could get a bite to eat before his evening show started. We were going to a vegetarian restaurant – my choice – so in protest he had brought his full length mink coat, which he’d hung over my chair, its soft hairs tickling my arms as I settled into the quiet of the costume department. He picked up another button and continued.

“I was working at the Palace Theatre. And of course I’d heard the rumors. People said that it was haunted. Well, every theatre’s haunted if you ask some people. It’s a mark of honor really. You’re nothing until someone wants to haunt you, that’s just the way of it, so I didn’t pay any attention. Have you heard the story?

The theatre is in its variety revival. There’s a packed house of 800 people sitting out on the newly refurbished velvet chairs, watching comedy singers, man and dog acts, a woman who can shatter glass with her top notes, a child ventriloquist, and of course, the dancing girls in their not quite altogether. It’s hot in the audience – this is before air con of course, and before every show the management would have someone fill up the cellar with great blocks of ice and fan the cool air into tubes that led up to the auditorium. So at the start of the night it was temperate, but at the end of the night, even on a cold fall night like this one,  it was hot and sticky, and the stage was hotter and stickier that that.

So when Louis Borsalino came out to start his act, his hands were sweating. He was a member of The Four Casting Pearls, in a swinging act – in the literal sense of the word, don’t be dirty. They’d climb up two towers, one on either side of the stage, then swing each-other over to the other tower and catch each-other on the way back – trapeezing without the trapeeze, you see. Louis Borsalino chalked up his hands and started to climb.

Some say that one of the catchers was jealous of his girlfriend and wanted him outta the way. Some say that the stage was too hot, and the chalk was poor quality and the slip was an inevitability. Some say it was pure fate. All I know is Louis Borsalino plummeted to the stage where he lay in the spotlight for the last time.

That’s the story. And when I started working there, I’m not gonna lie to you; the place had a bit of an atmosphere. But then again, all theatres have atmosphere.”

I wasn’t going to argue with that. Here in the dressing room the racks of costumes deadened any outside noise.  Plumed hats and masks looked down from the shelves. Bottles of buttons and jars of sequins gleamed on the counter like an alchemist’s workshop. Dust glittered like crystal in the working light. The ticking clock seemed to slow to the beat of a heart.

“The props table was probably the biggest problem. There was an ashtray in the play I worked on, and the damn thing was always slipping off the table and breaking. And the way things just disappeared we got through a dozen hand mirrors, a box of candles – still, what’s the definition of a prop? Something the actor can lose between the table and the stage. So nobody took it too seriously.  “It must be the theatre ghost” they’d say, swearing blind to the Stage Manager that they’d never touched the candelabra, or moved the champagne flutes. Still, you know actors. Skittish as thoroughbreds.

Then there were the drafts – I know, old theatre has strange drafts, but these would come and go – one moment you’d be fine the next, freezing cold, and it made people jumpy. But you know theatre folk – we’re a jumpy lot.

And sometimes I could swear that I felt someone looking at me. You know that feeling, where the hairs on the back of your neck all stand on end, or goosebumps ripple down your arm? And I’d turn around, but there’d be no-one there. It was ridiculous. So I gave myself a stern talking to, and tried not to be so melodramatic – yes, darling, it was hard for me, but somehow I managed it and the show went on.

It was near the end of the run, and one of the actresses had ripped her dress – put a heel right through the lace train and hoiked it around with her all Act 3. So I decided to stay and make a start on the sewing after final curtain. You know me; I’m not a morning person.

I finished the repair round about midnight and put the dress on a hanger, and I thought I’d set it over on stage left, where it would be needed for the act 2 quick change. It was pitch black as I entered the wings. I knew where I was going, I’d been on the show for months, so I walked over to the prompt corner and felt up the wall for the light.

Suddenly I felt something brush against my foot.

I jumped about a mile, I can tell you, and then I stood, stock still, listening into the darkness. I could hear my heart in my ears. And then I heard a gentle rustling sound.

“Who’s there?” I whispered. Silence.

It must have been a mouse.

I was as ready to go to a bar and order a vodka as Lisa Minelli, but I still had the dress. I’d stop being silly. I’d hang it up, then I’d be gone.

I turned on the light and angled it up towards the stage – it was just a reading light, covered in blue acetate, but it did the job. The floor was a web of shadows – ropes for the curtains and the wings, the scenery that we were flying high above the stage to make more room, cables, working lights, spots up on the rig – a dark lattice.

I walked out of the wings, trying to be brisk and efficient, and I’d got about half way across when I felt the chill. It was cold, not freezing cold, but cold, too cold to swim.

It’s just the air conditioning, I told myself, speeding up. It’s just a draft. I hurried towards the wing, my heart pounding. I was being stupid, I told myself. There was nothing here.

At first I only saw it from the corner of my eye.

One of the shadows seemed to move.

I stopped dead. There’s nothing to be afraid of, muttered. It was probably my own shadow moving. Must have been. The only moving thing here is me.

But out of the corner of my eye, I saw the shadow move again.

And there it was. A shape swinging across the stage in a great dark arc.

I couldn’t move. I was fixed to the spot.

And all the time, the shadow swung like a pendulum, to and fro, to and fro.

The shadow dropped, larger and larger, no longer a dark shape, but clearer, and in an instant I could see it was a man, dropping –

So I did what any sensible person would have done. I dropped the dress and ran the hell outta there like Elizabeth Taylor towards a 15 carat diamond.

He leaned back in his chair, snapping off the final thread and sticking the needle into his red velvet pin cushion.

“Are you kidding me?” I asked.

He stood up and put his coat on. “What do you think?” he said. 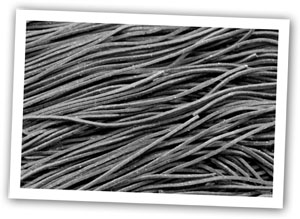 For a kitsch Halloween supper a deux, it’s hard to think of a dish that could come close to this black pasta for its elegant appeal.

Without the title, it’s squid ink pasta with seafood sauce, but whenever I look at black spaghetti I see witches’ hair. Sometimes I eat this with garlic olive oil and a sprinkling of parmesan cheese – in which case I think of it as witches’ hair with dandruff.

This is possibly why I get on so well with my 7 year old godson.

This entry was posted in This Dinner Will Get You Laid and tagged calamari, haunted theatre, pasta, recipe, sea monster, seafood, shellfish, shrimp, theatre ghost, witch. Bookmark the permalink.