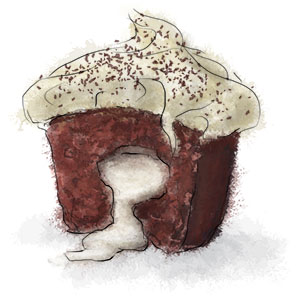 As part of his job, twice a year my husband has to get up earlier than usual, head out to a lecture hall and listen to a talk about being a responsible researcher.

If he was a psychologist doing experiments on how people react to stress, or a chemist looking into the affects of a new drug on teething babies, or a biologist harvesting stem cells from people with debt issues, then these talks would be relevant and helpful. Jon is a physicist. A theoretical one at that. Mostly he works at a desk with a computer. Sometimes he talks to a guy who works on a telescope.

Usually he returns from these lectures feeling a little glum at a wasted morning. Last week he came home bubbling with excitement. “I’ve heard the most amazing story!

“There was a chemist who was using his lab to make crystal meth. That’s an example of bad research practice.”

And honestly, that would have been story eough, but Jon was only getting started.

“Eventually the chemist was caught and arrested, and put on trial. Basically he was totally screwed.”

And that’s when things took a turn for the surreal.

“Things were not going well for the chemist in court, so he bought some chocolate truffles and injected them with poison and sent them to the Judge and his wife.

“Now the Judge knew better than to accept chocolates from strangers, but the wife ate one and became incredibly sick. She was rushed to hospital and had her stomach pumped, and luckily the doctors were able to save her life, but it was touch and go for a while.”

It seems like an oddly ill thought through plan, doesn’t it? I mean, what’s the win in this scenario for the chemist? He kills this judge, and every subsequent judge until there are no judges left in the whole of America who can convict him on a drugs charge, plus he gets away with all those murders too?

Jon agreed; “it’s not a great plan. And it’s seriously scary, that he would poison someone. I mean. Seriously.

“And of course all his colleagues, all the chemist community, knew what had happened. And it was the talk of the major conference that was happening at the same time. In fact, if the chemist hadn’t been on trial for drug manufacture, he would have been speaking that very afternoon.

“That night, all the conference members went up to their rooms and discovered that the turn down service had put a chocolate truffle on every pillow.

This recipe is the cornerstone of my traditions – it simply would not be Halloween without them. You can make them in traditional cup cake (fairy cake) cases, in which case you’ll get a dozen. If you’re using muffin cases you’ll get 8. The deeper the cake is, the longer it needs to cook. For fairy cake cup cakes you’ll need to check after 12 minutes, and muffin sized might take as long as 20. You want to get them out of the oven as soon as the top of the cake is dry. You can also bake these as more of a molten chocolate dessert, straight into a well buttered muffin tin.