Salmon with leeks and a cream mustard sauce 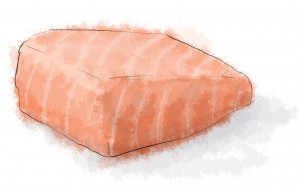 I first ate this at my friend Ranghild’s Easter supper. She’s from Sweden, and is pretty big on herring – which is fine by me, but in deference to Jon who hates fish she decided to make us salmon. It was inconceivable to her that salmon was a fish that someone could hate, just as my grandma once made a vegetarian boyfriend of mine chicken soup.

She grilled the fish then smothered it with mustard cream. My way of cooking keeps to the spirit of her dish, but the foil makes for less washing up, less potential smoking out the kitchen, and a more intensely flavored sauce.

Salmon can take strong flavors like this. Indeed, it seems to stand up to the competition, tasting more intently – intensely even – of itself.

2 Responses to Salmon with leeks and a cream mustard sauce