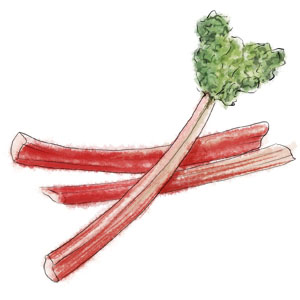 There was rhubarb on Fresh Direct this week. Ruinously expensive, but still, rhubarb. I bought it. Because I am terribly extravagant.

â€œItâ€™s more the fact that anyone would pay Anything at all for it,â€ said Jon, who grew up in an old farmhouse, and whose family forced rhubarb under old metal drums in the corner of the garden. â€œItâ€™s practically a weed.â€

But for me, rhubarb is as exotic and precious as any fruit or, technically, vegetable. My Mum loves it, and used to give us sticks of it to gnaw on when we were kids. Weâ€™d fill an egg cup with sugar, and dip and crunch and chew.

The rhubarb arrived. Slightly shot at, if Iâ€™m being honest, and a little flabby. There was no time to lose. I chopped it up, put it in a pan with a sprinkling of vanilla sugar and a splash of water, and cooked it on the lowest heat for about 15 mins, until it was soft, bright, puce pink, and tender. I let it chill in the fridge.

Then I whipped about a cup and a half of cream with a teaspoon of vanilla sugar, and folded in the cool rhubarb.

This is how you make Rhubarb Fool. Simple, right? almost unbelievably so.

You could use it to top a pavlova, or to fill some choux pastry, but for me, rhubarb fool is perfection. 1 bowl. 1 spoon. That is all.