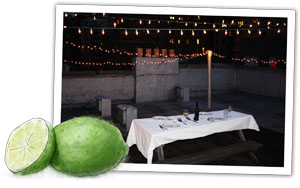 Iâ€™m not going to claim that this is very authentically â€œMexicanâ€, after all, Iâ€™ve never been there. But this is what I make when I want to feel in a fiesta mood, to pep up a hot patio party, or to warm up a cold winter evening when the sun seems out of sight.

I live in a tiny apartment on the top floor of a walk up in New York, and if you climb out of a window youâ€™re on the roof â€œterraceâ€. There are chimneys and wires and cables and fan vents, and thereâ€™s a rickety table that I cover with a white bed-sheet. Jon tied strings of fairy lights looping from chimney to chimney, and beyond them, the city soars into the sky. A bowl of stew, a corona and lime, a hot night on the roof with friends â€“ heaven.

If youâ€™re cooking for a crowd, this recipe is easily doubled up, but for up to 6 or even 8 people, Iâ€™d usually just add in more chicken and drain the beans even less vigorously to preserve more thickening goop. Iâ€™d add another handful of lentils per person, but leave everything else the same.