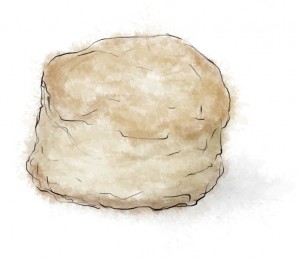 2 cups of flour
Â¼ cup of sugar
2 tsp baking powder (check the date on your tub â€“ if itâ€™s not well in date thereâ€™s really no point)
1/3 cup of fat â€“ a 50:50 mixture of unsalted butter and vegetable shortening (fridge cold)
1 egg
Â½ cup of milk 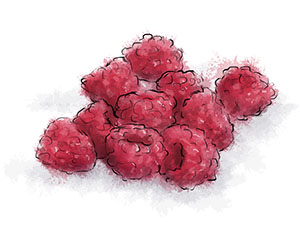 Raspberries have a fair bit of pectin in them, so theyâ€™re one of the easier jams to get a good texture on. I make my jam by weighing a few handful of berries, adding the same weight of sugar and cooking the two together on a low heat with a good squeeze of lemon juice for about 20 minutes. Jon likes his jam spoonable and thick. I prefer mine fairly runny, but if Iâ€™m making it for him, I add half a grated (peeled) granny smith apple. The pectin in the apple helps the raspberries to set. I keep my jam for a couple of weeks in the fridge.

Nigella Lawson has a great recipe for raspberry jam â€“ itâ€™s a very cool method and I recommend it if you want something a bit more formal than mine;

Clotted cream is the idea. Whipped cream sweetened with someÂ vanilla sugar is lovely. Itâ€™s sometimes hard to find clotted cream here in New York , so Iâ€™ve been using this recipe that I found on joyofbaking.com, for â€œfakeâ€ clotted cream. Itâ€™s good. It has the right texture and tastes smooth and rich and delicious.

This recipe originally appeared along with stories of my grandmother.