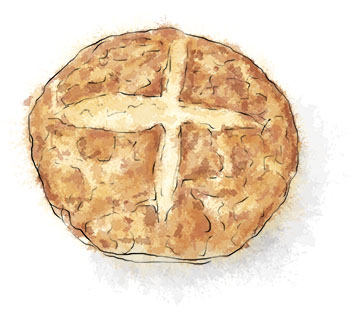 Soda bread is one of the least worrying breads to make because thereâ€™s no yeast to deal with. Not that yeast is especially complicated stuff, itâ€™s just that all the proving, warming, kneading, rising business can seem daunting in a way that adding a tsp of baking soda never does.

Traditionally soda bread is baked in a round shape with a cross cut into the top. There prosaic reason for this is that it helps let out some of the steam, but there are other religious and folkloric explanations. My favorite is that the cross lets out the fairies and evil spirits. How they got in there in the first place is not explained.

Iâ€™ve been making Rachel Allenâ€™s version of soda bread for 8 years. The recipe was written out for me by the very sweet Irish girl that I shared a bench with at cookery school. Sheâ€™d enrolled on the course because she was going to get married to someone who expected her to cook for his shooting parties and the like, and, because apparently nobody had told her that the 1950â€™s were over, she was attempting to meet expectations.

She was a naturally terrible cook, with no patience to follow a recipe, and the sunny yet misguided hope that everything would turn out fine in the end. After a month of burning, undercooking, over salting, forgetting the sugar, and butchering (not in a good way) she was ready to throw in the towel. Thatâ€™s when a kind-hearted instructor took her to Waitrose and taught her how to buy ready meals, transfer them to her own cook-wear, and make a salad to go along side. This is what she duly did, and if her Christmas cards are anything to go by, it has been the recipe for a happy marriage â€“ still set in the 1950s, with two children a red setter and a stately pile somewhere beginning with â€œBallyâ€.

And yet, she could always, always turn out a perfect loaf of soda bread.

Itâ€™s best eaten the day it is made because thereâ€™s nothing in it that acts as a preservative.

Just because Iâ€™ve given up chocolate for Lent doesnâ€™t mean I canâ€™t dream about chocolate soda bread â€“ add at least Â½ cup of chocolate chips to the dough (really delicious spread with cream cheese â€“ donâ€™t knock it till youâ€™ve tried it!)