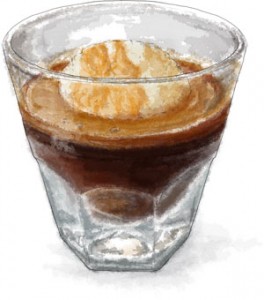 Coffee has been something of the Topic Of The Week, well, with my husband at any rate.

The Physics Department, deeming fancy coffee unnecessary on purely academic grounds, is rationing stocks for the summer. Supplies have now run out altogether. There is a fancy coffee drought. The machine is not stockable by normal pods or powders, but can only be fed with specially designed capsules straight from a wholesalers, which canâ€™t deliver until September, by which time, normal coffee service will have resumed – but until then … the mysteries of the Universe will presumably remain mysterious. Physicists are up in arms. In a mild sort of way. Muttering has occurred. Drama. “How can I concentrate on indirect dark matter detection without espresso?”

It reminds me of a conversation overheard at London Fashion Week several years ago between a model and a runner; â€œWhat do you mean thereâ€™s no coke?â€ Several raised eyebrows. â€œDiet Coke is absolutely necessary for thin people!â€

Honestly, since the Gagia coffee machine exploded on me one morning, showering our old kitchen in grinds and necessitating a hasty repaint of the cabinets, Iâ€™ve not be too fussed by espresso one way or the other. And since we moved to New York itâ€™s not been much of an issue â€“ we donâ€™t have any kitchen counter space at all, hence nowhere to put a machine, and itâ€™s far too heavy to ship from the UK . So itâ€™s boxed up in Jonâ€™s parents’ barn, and we either make strong coffee in one of those Italian silver jug contraptions perched perilously on the gas hob, or we buy it in cute little one shot cups.

Adding vanilla ice cream to the mix is just generally a good idea. Either as a no effort dessert or â€“ possibly even better â€“ as an extremely treat-y no fuss breakfast.

You could fancy this up for dessert by garnishing with chocolate coated coffee beans.

Iâ€™m told that this is not authentic â€“ told, in fact, by my Italian friend as she was doing it â€“ but you could add a shot of coffee liquor or amaretto if the idea struck you as being a good one. (It is. Though possibly not for breakfast on a Monday morning â€¦)

This entry was posted in The Monday Treat and tagged coffee, dessert, ice cream, Mysteries of the Universe, vanilla, vegetarian. Bookmark the permalink.

One Response to The Monday Treat â€“ Affogato