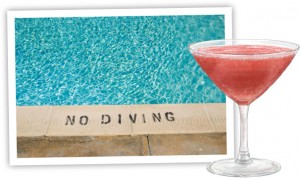 I have recently re-taken up swimming, and potter up and down my lane in a fairly pedestrian breast stroke, trying not to give in to chlorine-induced hallucinations about losing the locker key in a drain or swallowing a stray floating verruca plaster.

It seems that municipal pools are the same the whole world over. The same knobbly changing room floor, the same impotent hairdryers, the same odds of dropping your towel out of the locker into a puddle. At first my Dad would take me to Kingston Kingfisher to bob about in the wave pool, and later, my sister and I were shuttled to New Malden Centre, to perfect our intermediate strokes. She was all water-baby all the time, and I was, well, letâ€™s just say, less so. In fact, she took synchronized swimming lessons and was even in a synchronized swimming pantomime, while I was charged with taking photos to show Grandma. I managed to get a whole reel of film of the wrong ankles and swimming cap, not one of my finest moments. But the one thing we could both agree on; swimming was always better when followed by a Slush Puppy.

Do they exist in America? I certainly haven’t seen one, but then again, where would I go that would have one? So to keep us all on the same page; a Slush Puppy is a shaved ice flavored with a very synthetic and highly colored syrup. The best flavor was Blue. It tasted of blue-ness.

This frozen martini is pink, and tastes of pinkess. That’s not as exotic, granted, but what it lacks in blue-ness it makes up for in alcohol and also, thankfully, in taste.

Personally I like lime tortilla chips on the side for snacking on, but if you fancy a little light cooking, these wonton wrapper parcels are so worth the effort – hot crispy parcels of tangy cheese. Delicious. 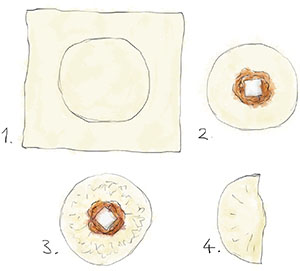