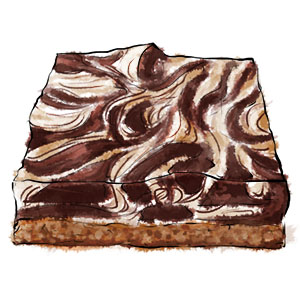 We were drinking cocktails in a bar on a weeknight – I know, life choices – when we overheard two girls talking; “Damn girl, you been working out?!”

The second girl had indeed been working out, and was happy to share the details, loudly, with her friend and half the bar.

“My ass is so tight now! Men are gonna want to hit that.”

“Na ah,” the friend disagreed. “Your ass is so tight, men are gonna wan to Wife That. They’ll take one look and they’ll be like, I am gonna Wife That. For sure.”

The expression “to Wife that” meaning, presumably, to marry, filled me with delight.

It’s amazing how inventive and expressive people can be. It’s quite the happiest I’ve been since I went to a rap battle feeling terribly British and heard the expression “give him some shine!”

This entry was posted in Uncategorized and tagged chocolate, graham cracker, marshmallow, s'more, s'mores, summer, wife that. Bookmark the permalink.

2 Responses to I’m gonna Wife that.