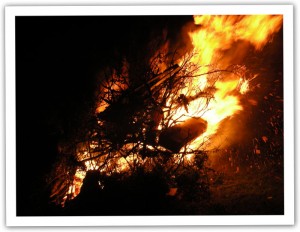 My husband is a chili lover, especially served on baked potatoes. It reminds him of childhood bonfire night at the farmhouse in Scotland, where he would spend the day with his brothers and father scouring the countryside with a tractor collecting enough dead wood and rubbish to build a fire several stories taller than the Dutch barn. One year the fire – in the field next to the house – melted all the guttering. Another year, flames leapt so high that the fire brigade turned up to investigate. They were handed baked potatoes and chili and stayed to watch the fireworks.

This is my homage to those chilies of yore.

Now I know chicken chili is not traditional, but I believe there’s some authenticity to the idea:

In the days when I was still trying to impress Jon and claim to love ALL the things he loved to do, I hiked the Inca Trail. I know. Me. Hiking. Though I made him carry my orthopedic pillow the whole way in a rucksack. Back in civilization, exhausted and aching, we went out for chili and were given individual le cruset pots of steaming spiced chicken topped with a crouton smothered in melted cheese – the kind that you would expect in French Onion Soup. An obsession was born.

¼ cup dried red lentils
1 can of kidney beans
Vegetable stock cube, the juice of a lime and water to cover – about a cup to a cup and a half depending on the depth of your pan. You could use a chicken stock cube, or use a cup of chicken or vegetable box stock , whatever you have around
Salt and pepper

This recipe originally appeared with a discussion about the mythic bonfires of yore.