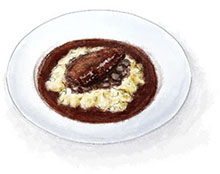 Coq au vin is some serious winter comfort food, but with an elegant edge. And it’s sexy in a deep, velvety buttery way – the kind of French way that makes up for it being basically a brown stew.  This is a proper coq au vin. It takes a little time, though there’s nothing tricky about it, it’s takes just a little more love to finesse.

Instead of adding meat to wine and cooking for a long time, we’re separating out the two processes. We’re making a super flavorful liquid from the wine, which is then strained, and we’re the cooking chicken this rich broth along with bacon, button mushroom and pearl onions. 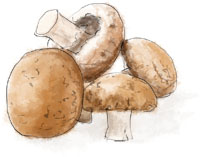 To follow? Something clean and fresh – a huge bunch of grapes, a beautiful cheese, some dried apricots and crunchy crackers, maybe some fresh celery, and a box of Bendicks bitter mints with coffee.

This recipe originally appeared along with a discussion of the important things in love, the price of stockings and the impracticality of shared baths in a New York apartment.