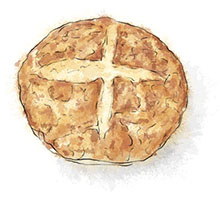 This bread is perfect toasted and smothered with unsalted butter and a good blackberry jam. It’s best eaten the day it is made because there’s nothing in it that acts as a preservative.

Just because I’ve given up chocolate for Lent doesn’t mean I can’t dream about chocolate soda bread – add at least ½ cup of chocolate chips to the dough (really delicious spread with cream cheese – don’t knock it till you’ve tried it!)

This recipe originally appeared with a story of a terrible cook I knew who could always turn out the perfect soda bread.