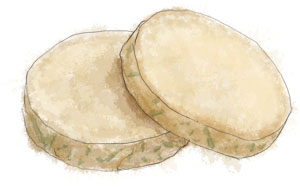 I learned to bake these shortbread biscuits on my first day at a disconcertingly posh cooking school that I attended, where the other girls all had nicknames like Bunny and – no word of a lie – Bugs. The recipe was invented, I believe, to use up scraps of cheese, and that’s most usually when I find it comes in handy.

The biscuits are great dipped into bowls of hot soup, or spread with cream cheese, or as part of a ploughman’s, with (more) cheese, pate, chutney and celery slices. They form the basis of so many perfect autumnal lunches, and they can be frozen wrapped in saran wrap (cling film) so they can be baked fresh whenever the need arises.

Tinker with the herb flavors and the cheese flavors to make a variety of shortbreads. If I’m using left over blue cheese I might use oregano instead of rosemary, or caraway seeds and celery salt. I’ve also been known to add paprika, to roll in sesame seeds or chopped walnuts.

This recipe originally appeared along with a story of love found on a park bench.