This dinner will get you laid – Cinnamon Buns 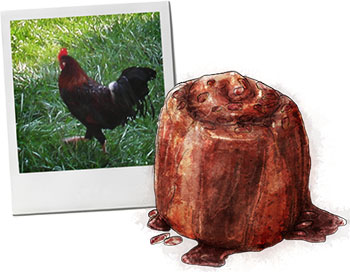 The cinnamon buns really got me.

We ate them on a swingy bench outside the Amish bakery, licking sweet icing off our fingers as a picturesque cockerel crowed and chickens scratched and a goat chewed up the garden. It was perfect. But then the buns were gone, and we drove back to New York and I was left a little bereft.

Clearly, I would have to find a way of getting hold of these buns without having to drive 4 hours to Pennsylvania any time I wanted them. There would be a lot of problems if that was the plan. Foremost â€“ I donâ€™t have a car.

So I started with the postcards that I picked up in the bakery gift shop. Now usually, I wouldnâ€™t trust a recipe on a postcard. But these were Amish recipe postcards, and the Amish are honest folks, right? They wouldnâ€™t mislead me with a duff recipe, right? Iâ€™d have had slightly more confidence had the two recipes not been very different.

A happy afternoon of testing occurred, and a number of other cookery books were consulted before I decided upon a combination of recipe postcard 1 and a good housekeeping magazine article from the late 90s.

Now it pretty much goes without saying that these are very special buns. People who eat them will adore you for it. Total strangers who smell them from your kitchen window will bring you flowers just to get a bite. If youâ€™re waiting for a reluctant boyfriend to get the hell a move on and propose already, wear an apron and heels, bake these and tip the balance. But Iâ€™m not going to lie to you. They take a little effort.

This is an afternoon in the kitchen project. Thereâ€™s nothing complicated or difficult about it, take it step by step and don’t let the undertaking freak you out. Itâ€™s proper old fashioned cooking, with a gentle rhythm that canâ€™t be rushed.

This entry was posted in This Dinner Will Get You Laid and tagged amish, baking, cinnamon bun, dessert, pastry, pecan, treat. Bookmark the permalink.

3 Responses to This dinner will get you laid – Cinnamon Buns