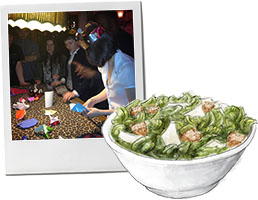 It was my friend Mollyâ€™s birthday this week. She turned 25 and celebrated with whiskey and an origami competition in a dive bar on the lower east side. By 10pm she was in reflective mood, looking back over her quarter century on the planet and considering the lessons life had taught her thus far:

â€œNever let a girl move in with you after three dates if youâ€™re pretty sure you donâ€™t actually like her. It will end up costing you money when you have to help her with the deposit and move her out. Also, if when youâ€™re moving her in you accidentally hit your eye on the door of the taxi, thatâ€™s the Universe trying to tell you something.â€

She pointed to her eyebrow. â€œSee that. That is my relationship scar.â€

It made me wonder about myself at 25 and the things that I had learned by that point in my life. Nothing quite as practical as that, for starters.

Worryingly, some of the things I know I knew then I have already forgotten; large portions of Beowulf and Shakespeare that got me through University exams, how to navigate the London Underground, all the words to Canâ€™t Touch This.

But thankfully, some lessons remain â€“ that pink cowboy boots are not and were not a good look, how to debug Screenwriter, how to make an awesome Caesar dressing.

A really good Caesar Salad is a joy to behold. In a world where pretenders lurk in every lunchtime deli, itâ€™s satisfying to make and eat the real deal â€“ the difference between cake mix and cake.

This entry was posted in This Dinner Will Get You Laid and tagged 25, anchovies, Caesar Salad, chicken, dating, life lessons. Bookmark the permalink.