Murder Most Horrid and Egg Creams to calm the nerves 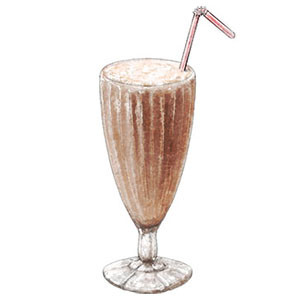 My friend Matthias recently went to the corporate headquarters of some fancy company somewhere to look into doing a redesign. Apparently, it was all very Orwellian;

â€œThere were these cubicles, thousands of them, in a huge room. And all the walls were taller than a person standing up. So you would be sitting in there, knowing that there are people around, but you canâ€™t see them.â€

We all agreed that this would be a great set up for a murder. â€œAs long as you were quiet. The body could be there for days. Well, at least until the cleaner came round at night.â€

â€œChloroform really comes into its own here, doesnâ€™t it?â€

Our conversation descended into dystopian melodrama. I suppose we all watch too many detective series. There was only one solution: Egg Creams. And luckily, our office is right by Eisenburgs (Fifth Ave between 22 and 23rd).

The classic New York soda staple is an acquired taste, I think. The first time I had one â€“ â€œthe greatest one in the city!â€ (random guy sitting next to me at the counter) I was non-plussed. Why add seltzer to perfectly good chocolate milk? The bubbles felt harsh against the silky chocolate. Even the foamy top annoyed me â€œit looks like scum!â€ I resolved that this would be my first and last egg cream. But then, well, I couldnâ€™t stop thinking about it. In the way that once you eat really spicy food, you kinda want more really spicy food, even though it hurts? Well, that way. And so, over time, I became an egg cream gal.

As you can see, this drink includes neither egg, nor cream. There are plenty of legends as to why this might be â€“ itâ€™s just how a really thick Brooklyn accent pronounces â€œa creamâ€ says my friend (and Brooklyn native) Laura. But the story I like the best is that the theatre producer Boris Thomashevsky asked a local soda fountain to re-create the drink, which he had enjoyed in Paris. â€œChocolate et crÃ¨me.â€ Say it quickly a couple of times. Then make one, or go sit up at a counter and order one, and drink in the 1920s.

This entry was posted in Uncategorized and tagged egg cream, Eisenburgs, seltzer. Bookmark the permalink.