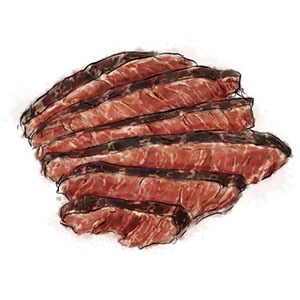 Jon and I have been together since we were 19, and in all that time, he has been dramatic precisely 3 times, and all for good reason: moving countries, changing jobs.

He has never, to pick an example at random, called me in the middle of the day sobbing because a cat on the internet â€œlooked mournfulâ€, or he ate a disappointing sandwich and regrets wasting the calories, or his nail polish chipped on the first day of a new manicure and it reminded him of the temporal nature of life and the essential futility of all endeavors.

And so, every so often, I make him skirt steak on a weeknight to let him know that his tolerance for drama in others is appreciated.

Slice and serve with: