The legend of the Insect Eater – and Guinness Beef Pie 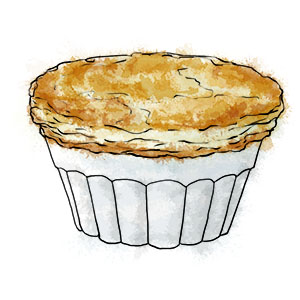 So I met a man at a party who told me that he once had a friend who worked at Coney Island in a curiosities show. Her particular curiosity and talent was that she was able to eat insects in a theatrical way.Things were going swimmingly for her, life was good, until she suddenly, and quite unexpectedly, became a vegetarian.

â€œObviously the gig was up with the insect swallowing,â€ said the party guy. â€œShe had to diversify. She took up sword swallowing instead.â€

This is terrifying on a couple of levels. Insects and swords, obviously. But also, the sudden realization that you have turned into a vegetarian. Poof. Vegi. Thatâ€™s that.

Jonâ€™s brother became a vegetarian, mostly for health reasons, many years ago, but he was determined that this would be no barrier to occasionally eating his favorite food: steak with blue cheese sauce. Sadly, his body, once cleansed of meat, was super reluctant to have it back again, and, miserably, that was the end of that.