Rosti usually involve both grating and frying â€“ both of which can seem like a step too far, I know. And honestly, boiled new potatoes cut in half lengthwise and smothered with sour cream and caviar are a delicious alternative. But Iâ€™m looking for crunch, so I persevere.

And while I canâ€™t think of a short cut for the grating â€“ though a food-processor will do the job, providing the grater attachment can be located, by which time it would usually have been quicker for me just to grate the potato in the first place – but the frying? Totally. 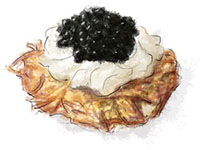 This originally appeared as a recipe for All Soul’s Day – inspired by my time living in Poland.