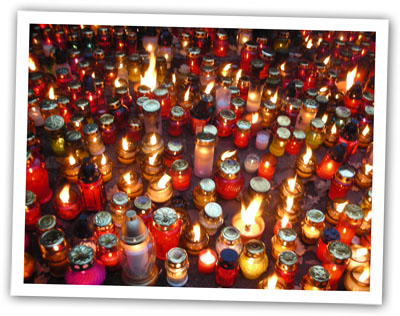 Before Moving to New York, Jon and I lived in Warsaw, where Halloween wasnâ€™t such a big deal, but All Souls, the day after Halloween, really, really was.

By late afternoon, leaves had been swept away, stone work had been cleaned, statues had been scrubbed with toothbrushes, brass railings had been polished, and then, as a final mark of remembrance and respect, votive candles were laid on the ground.

The little flames flickered in the gathering dusk, inviting the passer-by to stop, reflect and remember.

And then we went home to eat potatoes and sour cream.

So this year Iâ€™m making potato rosti which take me back to Poland in one bite, and the sour cream and mournful black caviar seem in keeping with the mood of the day.

Rosti usually involve both grating and frying â€“ both of which can seem like a step too far on a Monday, I know. And honestly, boiled new potatoes cut in half lengthwise and smothered with sour cream and caviar are a delicious alternative. But Iâ€™m looking for crunch, so I persevere.

And while I canâ€™t think of a short cut for the grating â€“ though a food-processor will do the job, providing the grater attachment can be located, by which time it would usually have been quicker for me just to grate the potato in the first place – but the frying? Totally. 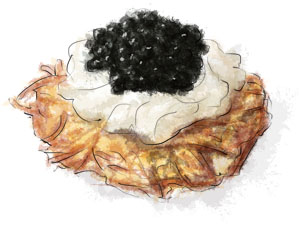 This entry was posted in The Monday Treat and tagged All Souls, caviar, potato, recipe, rosti, sour cream. Bookmark the permalink.