Mac n cheese is the sum of three processes; cook pasta + make cheese sauce + bake for Â½ an hour. This recipe is from my husband Jon’s notes, and serves 6, generously. 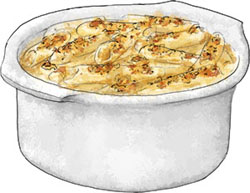 This recipe initially appeared in a post about one of my husband’s favourite foods and a dish he learned to cook growing up.