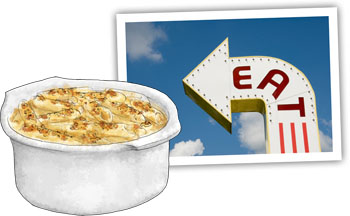 Of all the dinners Iâ€™ve hosted for my close friends Sasha and Matt over the years the best one, the no-doubt-about-it favorite, was actually not cooked by me at all, but by my husband Jon.

And so to the mac n cheese, which Jon has been perfecting for as long as heâ€™s been cooking.

His mother was taking a diploma one evening a week, so it was agreed that the family would take it in turns to make dinner both for that evening and additional homework nights. Armed with his Usborne First Cook Book the young Jonathan whipped up cheese soufflÃ©, chocolate profiteroles, and mac n cheese with the kind of fearlessness and enthusiasm that comes from being 12 and being trusted with a responsible job.

So this is what he cooks for me when Iâ€™ve had a long day and canâ€™t face the oven, and this is what I cook for Sasha and Matt, in the vain hope that one day theyâ€™ll like my efforts as much as his.

And itâ€™s also what I cooked for Sara, fresh from her date with Sean the office Christmas after party guy.

They went out for a drink after work. There were awkward silences. Then the wine kicked in and things went better, conversation flowed nicely, he laughed at her armadillo joke. He suggested ordering food. They shared fries. Which has to be a good sign, right? Then he promised to email and apparently dropped off the face of the earth for three days, when he broke radio silence with a text message reading â€œFun Nite. Again sometime?â€ Which might be good, or might be bad, and certainly is ambiguous given the time lapse.

Saraâ€™s conclusion? To wait three days before responding in the affirmative.

And so the games commence. 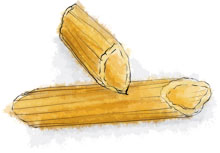 This entry was posted in This Dinner Will Get You Laid and tagged cheddar, cheese, gruyere, macaroni, pasta, penne, Sara. Bookmark the permalink.