This Dinner Will Get You Laid – Traditional Irish Stew 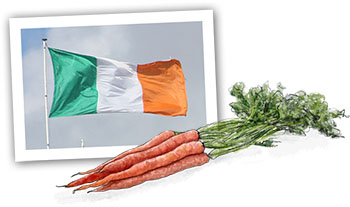 I would like to pay tribute to my Irish friend Christie, who moved to New York in the height of the summer, all bouncing curls (how? The humidity was off the chart) and green eyes and a good line in filthy jokes.

It was at an everybody-has-plans-for-the-4th-of-July-so-let’s-have-a-5th-of-July barbecue at a mutual friend’s house up in Washington Heights that I first discovered her singleness of purpose:

“Where are all the available straight men?” she wondered. Not the first person to ask such a question at a party in New York, and certainly not the last.

“Not a single one?” she couldn’t believe it.

“So let me just clarify; there are no single straight men at this party, and here I am in Versace!”

“New York can be pretty brutal like that” I commiserated.

“We shall see” she said.

Undaunted, she took herself out to an Irish bar, met a handsome Bostonian lawyer whose cousin, by some strange co-incidence, lives just one street away from her aunt in Cork, and was thoroughly coupled up within a month.

Stews are rarely elegant, but that’s really not the point. An Irish stew is sweet comfort food that emotes caring with every bite.

2 onions
1 tbsp butter
3lb lamb – a stewing cut, I use best end of neck, and I ask my butcher for bones for the stock
6 small carrots
2 tbsp pearl barley (optional)
5 cups chicken stock (from a box is fine)
Potatoes – about 4 cups peeled and diced (which is about 6 large potatoes) or a handful of new potatoes per person
Bay leaf
Spring of thyme
2 tbsp flour
Olive oil
Salt and pepper
(Parsley and fresh bread to serve)

This entry was posted in This Dinner Will Get You Laid and tagged carrots, chicken stock, irish stew, lamb, onions, pearl barley, potatoes, st patrick's day, stew. Bookmark the permalink.