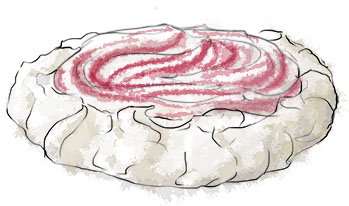 I love rhubarb inordinately. My mother loves rhubarb too – stewed to a pale pink pulp, poured over yoghurt, topped with vanilla ice cream, crumbled – you name it, she’ll eat it. When I was little she’d buy bags of rhubarb and stand at the kitchen counter chopping it and dropping it into the oven dish. I’d be given a stick of raw sour rhubarb to chew on, and a little bowl of sugar to dip it into. For every bunch I buy, one stick is sacrificed to re-creating this food memory.

Once the rhubarb is cooked, it can be frozen, so it’s worth investing when there’s a seasonal glut and it’s going for a song.

Rhubarb fool is one of the purest forms of “cooking” with rhubarb – the vegetable (yes, it’s a vegetable) is poached to a soft, sweet puddle, then swirled into whipped cream and spooned into glasses. It’s perfection just as it is, but a rhubarb fool pavlova is a seriously beautiful, impressive desert. Again, there’s no great culinary secret. You make a pav, you top it with fool. You spoon some syrup over the top. And life is very, very good.

I’d suggest a desert first dinner – rhubarb fool followed by some great cheese, a French loaf, some celery and a bunch of grapes. I love backwards dinners – they benefit from feeling ever so slightly naughty – we’ve been brought up to expect and to eat a “proper” meal but actually we’re eating treats! A topsy turvey day like April 1st needs no other excuse. 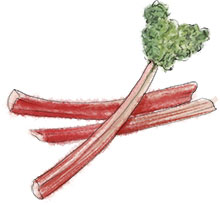 If you’re serving it at this stage, which would be delicious, spoon into glasses and drizzle over some of the syrup