The Wednesday Tipple – Spice-infused Appletinis with Grilled Cheddar, Walnut and Apple Sandwiches – oh, and some nudity too. 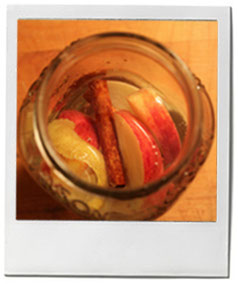 When Jon’s Dad came to visit us, he’d look up at the buildings and sigh. He pretty much could not believe that people would want to work and live piled up on top of each other in boxes.

He lives in an old farmhouse surrounded by green in the middle of Scotland. It was a bit of a shock.

Personally, I like living stacked up like Lego. Firstly, because we’re packed so densely, we can support a bodega, a bar and a cup cake shop on pretty much every city block. Secondly, because you never know what you might see going on in the building opposite.

In our old apartment, we lived across from the obligatory Man in Pants. White ones. He’d come in from work and take off everything but his pants. Every day. He’d make dinner, watch tv, pace up and down while on the phone, all in his pants.

Then, a year later, Big News. Ken and Carrie, next door neighbors, saw it first. Pants Man had got a boyfriend … who also liked to come in from work and take off everything apart from his pants. We all gathered in our living room window to look over the road, and there they were, arranging books on a shelf. Pants Men.

Recently, while waiting for a table outside a soup dumpling restaurant in Chinatown, I bumped into Molly who was collecting take away food with her friend. It turned out, the friend worked in an office opposite a deserted office floor, only ever day, a woman turned up, took off all her clothes, opened the window and sunbathed on the floor for about an hour. 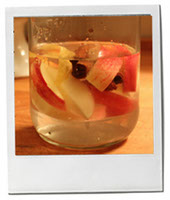 “It’s the most peculiar thing. For one thing, there’s the time commitment. You’d think she’d have a job to go to or something.”

“Unless that actually IS her job, and the guy in the office above you is paying her to liven up the view every day.”

Anything is possible in the Big Apple.

When I first started coming to New York, about 10 years ago, Appletinis were The Thing to drink. They were vivid green. And wholly awesome. Then Cosmos came along, and that was the end of that. And then Cosmos too were over and people who care about that sort of thing were reduced to ordering them in bars with a surreptitious whisper.

This is serious finger food to go with a pretty serious cocktail. You could leave these as whole sandwiches and call it dinner, but for cocktails, I cut them into thirds long ways to make finger sandwiches.

3 Responses to The Wednesday Tipple – Spice-infused Appletinis with Grilled Cheddar, Walnut and Apple Sandwiches – oh, and some nudity too.