The Wednesday Tipple – A Russian Scientist lives up to a radiation stereotype, and we all eat hot peppered walnuts to calm our nerves 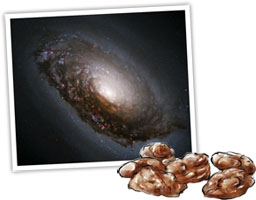 I mentioned that I once had an exceedingly dull job working the day shift in a hotel bar. â€œSure, we reused the lemon garnishesâ€ I told a group of appalled New Yorkers. â€œAnd we were supposed to tip any un-eaten hot nuts back into the hot nut dispenser for next time.â€

â€œI have often wondered about this,â€ said a Russian friend of one of the people in this group.

â€œOlives. I wonder, how many times does an olive go out in a bowl on the bar, then back into the jar, then out on the bar again. So I think, I will do an experiment.â€

I should probably say at this point that he is an eminent scientist.

â€œI put a tiny bit of radiation on the olive â€“ nothing too much, only the same as people would get from the environment anyway, well, more or less â€“ then I would monitor the olive with a Geiger counter and see what happened.â€

He looked at us proudly, expecting perhaps, academic interest.

â€œOh my God! You are out of your mind insane!â€

â€œYou radiated people to see how much a bar reused an olive? Jesus Christ!â€

â€œOh.â€ He sat for a moment, thinking. â€œMaybe my English is not so good. I meant, it would be a good idea to do this, no? It would be interesting and also funny, I think. It is a joke. I do not do.â€

But suspicion had been planted in our minds. None of use ate our martini olives.

The only way to avoid the â€œshould we throw away these nuts or tip them back into the packetâ€ conundrum is to make nuts that are so delicious that there will not be any left to worry about.

I tried these sweet peppery walnuts at Hilaryâ€™s on Sunday, came home and described them in great detail to Jon, who came home the next day with a bag of walnuts, ready to try them out. 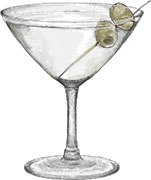 Here’s Hilary’s recipe as she sent it to me.