The Monday Treat â€“ Pickled Strawberries and a Hipster Trap

As Jon and I walked through the urban wasteland of Gowanus Brooklyn, looking for a disused canning factory, we had to wonder; had we fallen into a Hipster trap?

Weâ€™d been promised a rooftop screening of an as yet unreleased indi documentary, preceded by a woman playing songs from her new Kickstarter-funded album, featuring the Zimbabwean thumb piano and a baritone ukulele. No word of a lie.

â€œThis is exactly how I would do it if I wanted to trap a Hipster,â€ said Jon. â€œIâ€™d lure them out to the middle of nowhere â€“ it even says on the flyer that this is a disused factory â€“ with the promise of off-beat entertainment. Maybe Iâ€™d bait the trap with a Lukeâ€™s Lobster roll, some organic, locally sourced, homemade artisanal shaved ice. Bang. Hipster trap.â€

Personally, Iâ€™d turn to pickles â€“ sure, some of the vocabulary would be the same; artisanal, organic, homegrown, farmerâ€™s market, locally sourced, handcrafted, homemade.

Itâ€™s funny to think that the same words that mean â€œcosts at least 10 bucks, no sweatâ€ in New York also mean, â€œI grew these in my garden and couldnâ€™t live with my Methodist self to throw them awayâ€ in Grandma speak.

Still, Hipster, Grandma or not, thereâ€™s something lovely about a Mason Jar full of something you made yourself that makes your sandwiches off the charts delicious.

These pickles keep for about a week in the fridge. If you want to keep them for longer, sterilize the jar properly and seal. 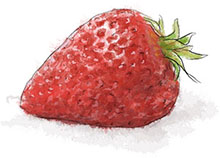