This Dinner Will Get You Laid – Text, Love, Carbonara 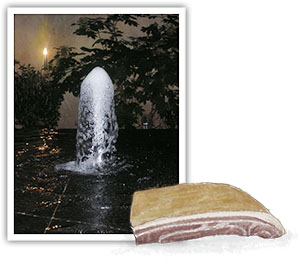 Over coffee and the papers I received the following text message – no word of a lie – it’s still on my phone if you want to check;

This is my new number

Fair enough, I thought. So I have no idea who you are, but it’s early. Another cup of coffee, all will be clearer. A few minutes pass.

When R U goin 2 take kids

I put down my coffee. “Um, so someone wants me to take their kids.”

“I don’t know.  Anyway, does where really matter?”

He studied the screen. “Who do we know who has kids?”

“Well, Susan has a baby, but that would be kid singular and she would punctuate, so it’s not her, and I know Jean Marie’s kids are at camp, so it’s not them. Should I text back?”

“Say you’ll babysit the kids and your hourly rate is 25 bucks.”

I texted back, feeling very British.

Hello. This is a bit awkward, sorry, but who are you?

It’s the girl u met @ the club who the hell u think it is I just give you my new # KEEP YR PEEPS STRAIGHT.

I’m really sorry but you have the wrong number

R u shittin me?

If U are shittin me I WILL BEAT YOU

I’m not shitting you.

I returned to my coffee and that was pretty much the end of that. But the incident made me think.

Here we have a woman who wants a person or persons unknown to take her kids. Clearly, she feels very passionate about the whole thing. Since the initial meeting took place in a club, I’m going to assume our woman met a man, and somehow his number has become mixed up and mutated into my number.

There are several possibilities.

The man gave her a fake number. Certainly possible. Though it paints an unflattering portrait of a woman who would give her kids to a guy who was so disinterested in her that he fobs her off with a string of numerical nonsense on a napkin.

Or it’s possible that this was no random hook up. Sure our woman and our mystery man meet at a club, but what if they recognized each other from the school gate, got chatting and arranged a playdate for their children? Here we are, the morning of the play date. Her kids are excited. And he’s running late. He calls to tell her but she’s changed her number so, remembering this, she texts him to let him know, but she mis-dials or mis-reads and gets me. It’s going to be ok though – he’ll be there as soon as the traffic clears and they’ll all go to the park as planned. It’s possible. Also “club” could be misleading – the mind automatically thinks dancing, but it could be a chess club, a debate club, a glee club for all I know. I’m just saying.

And there’s a third possibility. That we’re dealing with an honest and tragic mistake. These two people meet at a club. He can dance. She notices him the moment she walks in. He smiles at her. There’s chemistry. It’s undeniable. And as the night leads on, it turns into something more. They leave the club to go somewhere quiet. They drink margheritas and talks more honestly than they have talked to anyone in years.  When they kiss, they taste of lime and salt. They walk back to his place as dawn starts to turn the city dusty grey. Her body shivers when he touches her. Later he makes pasta and they eat in out of the pan in bed. The day passes. He wishes she could stay forever, but she has to go and collect her children from their grandparents. But they’ll see each other again soon, she promises. Very soon. Tonight? No. She needs to spend some time with her children, but soon… He can’t wait to meet them. Well, normally she’d want to wait before introducing them to new people. This relationship is different. They both feel it. He’s been doing some work on the new IMAX film premiering at the Natural History Museum. He could get them all in if she wanted. Next Saturday? He’ll pick them up – he gets a parking space. Call him. Please. She promises. He looks into her eyes. Is it possible to fall in love so completely, so overwhelmingly, so suddenly?He writes down his number. But he is number dyslexic …

And one of the great love stories of the age is lost to modern technology.

It could happen. My friend Helen met her now husband in a nightclub. It wasn’t love at first sight though by any means. She was on a hen do (no, not her own), he was celebrating a deal at work. He could dance. She suspected he might be gay. He asked her on a date to see Avenue Q. She was certain he was gay. They went out for Italian afterwards. Why can’t my straight dates be as much fun as my gay dates, she wondered. Then he kissed her. And that was that.

Life, happily, does bring us intense nights of dancing, and kissing and talking, and not wanting to miss a moment by falling asleep. And on such nights, nothing hits the spot like spaghetti carbonara taken hungrily back to bed. 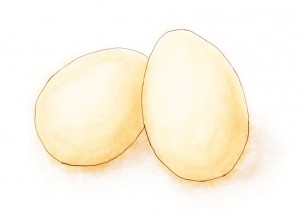 I say spaghetti, but as often as not I use tagliatelle – most usually the fresh egg pasta, which cooks in no time at all, which is precisely why I use it. If I was cooking for friends, or suggesting this as date food, I’d probably go ahead with penne – for less sauce all over the face potential. But for a lover? Slurping and mess doesn’t feel like a bad thing.

There’s lightly cooked egg in it. Make sure you use good organic eggs you can trust. If you’re feeding this to pregnant people and you don’t want to take the risk, swap out the eggs for a generous ¼ cup of cream – it’s not the same, but it is still really good.

Ingredients (serves 4 – 6 if you add in a salad, but I wouldn’t significantly alter the quantities for a midnight feast a deux)

1 packet of spaghetti
½ cup cubed pancetta (I buy a huge lump, then chop it portion it up and freeze – it’s fine to cook it from frozen – but you could use bacon at a push)
1 small onion (optional) 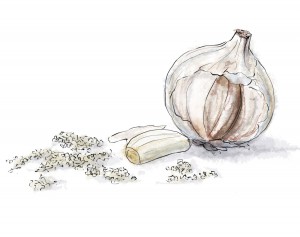 This entry was posted in This Dinner Will Get You Laid and tagged bacon, carbonara, eggs, garlic, onion, panchetta, parmesan, pasta. Bookmark the permalink.