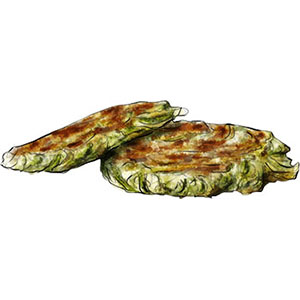 “I can’t come out after the rehearsal,” said Kathleen. “I promised my friend I’d see her Belly Dancing. It’s her first ever show.”

Well, that should be fun! We encouraged.

“Possibly. But she takes it really seriously. On a scale with the Bolshoi on one end and Swinging around a poll on the other, she’s right up with the Bolshoi. Also, she thinks she was Turkish in a previous life.”

“I did Belly Dancing once,” said Lisa. “The class was in this Lebanese restaurant. I slipped on a kalamata olive and twisted my ankle.”

I’ve been a big fan of the zucchini pancake ever since I read about them in Claudia Roden’s fantastic book New Middle Eastern Food.

Ideally, you’re looking for smaller zucchini because they don’t have such a large seed core. But it’s not a big issue. In my Turkish cookery class we grated the zucchini after cutting it in half and taking out the seeds. I don’t do this at home. Instead, I grate into a kitchen towel then wring out the zucchini to get rid of most of the water. It works just fine. Though especially traditional Turkish Grandmothers would apparently take umbrage at this, so bear that in mind should you be making these for one.