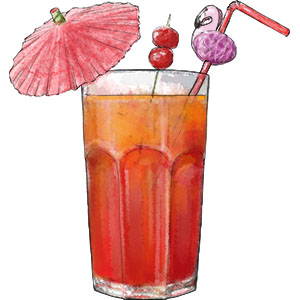 â€œI was covering a golf party at the Playboy Mansion,â€ said Rhett, casually. Rhett is a sketch writer, and son of infinitely awesome parents, naming-wise. Heâ€™d been interning at a paper in LA, he said, and had been sent out to note and observe.

â€œActually, the Mansion was a bit of a disappointment. It wasnâ€™t all that. The biggest celebrity there was the dude from The Blindside, and he was having a good time, but he might have been the only one. I wouldnâ€™t go in that pool. You never know.â€

He shook his head wisely.

â€œAfter the game, there was a pajama party, and I though, if Iâ€™m going to get noticed by the girls, I need to be original. Everyone else would be there in Heff-style silk dressing gowns. So I bought a onesie. With hamster ears.â€

He brought out his cell phone and pulled up a picture to show us. We goggled.

Sex on the Beach

Some weeks need a cocktail with a stupid name to jolt them out of the run of the mill. This is that drink. Obviously.

Fill a tall glass with ice, pour in the alcohol. Top up with cranberry and orange juice. Stir.

This entry was posted in Uncategorized and tagged cocktail, cranberry, orange, peach schnapps, sex on the beach, vodka. Bookmark the permalink.