Lancashire Cream and the Student Prince 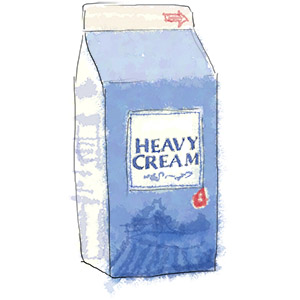 My grandma is a big fan of the afternoon movie. She has stacks of videos arranged by the television. A treasure trove of old favorites â€“ Singing in the Rain, Oklahoma, Annie, Some Like It Hot, Calamity Jane. All fabulous, fabulous ways to spend an hour or two with a cup of tea and some kind of baked good.

But her favorite is The Student Prince.

The Student Prince is the semi-operatic tale of a Prince who becomes a student, falls for a barmaid, tries to kiss her, gets her fired, commands her to return, and somehow persuades her to fall in love with him by singing straight at her face really loudly. Then – spolier alert – he breaks her heart by going back to being a Prince again. It stars one handsome American guy as the titular Prince, and another unseen Italian opera star (Mario Lanzo) as the Singing Voice of the Student Prince. This is kinda genius. Everything else about the movie is pretty much a nightmare.

If itâ€™s possible that youâ€™ve managed to live your whole life and Not experience the unique mystery of The Student Prince, this YouTube clip will surely only strengthen your resolve.

I think my Grandma knows how we all feel about The Student Prince, because she sells it hard. â€œWhatâ€™s this film? Is it the one about a Prince whoâ€™s a Student? I havenâ€™t seen that one in years. Shall we have a look at that one? I donâ€™t think Iâ€™ve seen this one before. Itâ€™ll be something new. This is a good one. Is this the one you like?â€

I give in. Last time I was in Wigan (2 days) I watched Student Prince twice.

My sister is less of a pushover. Evidence? This email from over Easter weekend â€“ a mere three weeks after my own Student Prince marathon:

“Grandma: Heidi found a tape at the back of the telly, (pause), its one I’ve not seen in years, (pause) a favorite …

Grandma: One about a prince …

Me: A Student Prince?

Grandma: Yes, I haven’t seen it in years shall we watch it?

Now you see, I would never do this. I hedge, I compromise, I try to please. Iâ€™m easily led. I end up eating Thai food when Iâ€™ve been craving pizza all day.

But bravery and resolve ultimately did not go so well for my sister.

â€œWhat happened?â€ I asked her. 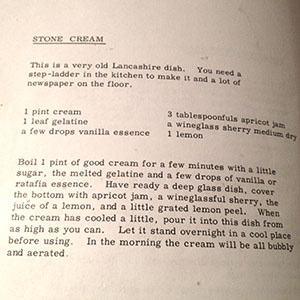 Jon scoffed when I proposed making this â€“ recipe given to me by cousin Emma from an old cookbook. But we made it â€“ and with less mess than the recipe warns. Probably because when I stood on a bar stool to pour the cream out I used a huge deep salad bowl, so less spattering potential. This is very fun. The way cooking felt when you got to skip maths class to make fairy cakes with volunteer mums in primary school.

The next day the cream had the texture of mousse. Light and lovely. Not a joke vintage recipe at all. Worth an experiment.