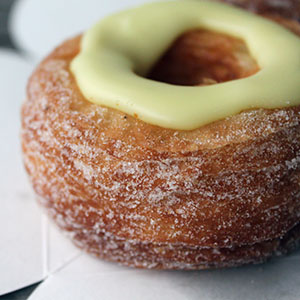 Jon and I have been ships that pass in the night recently. Me to London, him to Rio. When I got back to our apartment, tired and cranky, I discovered that he’d put milk in the fridge for me, a vase of flowers on the table, and a Cronut in the fridge.

Either he loves me very much, or, he’s totally having an affair.

Apparently, he and friend Yosi had ”got up early” – how early, you ask? – “5.45am early” to stand in line before the Dominique Ansel Bakery opened in order to get a New York’s hottest food item, a croissant crossed with a donut, filled with lemon crème anglaise.

“We brought folding chairs and just sat on the sidewalk till they opened at 8. It was nice weather. I slept for a bit. It wasn’t too bad.”

Still, it seems a lot for a pastry.

But if you truly want to experience a Cronut, and don’t want to pay $250 on Craigslist to have a bootleg one delivered to you (“free delivery in Manhattan!”), an early morning is the price. A few weeks ago, when Cronuts were a little ahead of the curve, a little edgy, back in the days when you’d say “Cronut” and people would say “say, what?” Jon and I sauntered in at 10am one Saturday to get one, and were Literally laughed at by the guy on the till. “You want a Cronut!? At THIS time of day?! Ha! NO WAY!” he chortled. “Everyone in the city wants these guys.”

And then the imitators sprung up. Over the street from our apartment, the delightful Mille Feuille bakery took up the cause, making teeny tiny 2 bite-sized versions, called Croissant-Donuts so as not to infringe on anyone’s copywrite. Quite by chance, Jon was there on their launch day, buying himself a morning croissant. “I didn’t know whether to buy one or not,” he confessed when I got home from a choir rehearsal. “They’re $5, they’re really small, and are they actually a Cronut?”

Yes, that’s $2.50 per bite, but – uh – a knock off Cronut – Methodist upbringing be damned. “We’re having one!” I declaimed. We were back in the shop by 12.15, by which time, mysterious New York foodie word of mouth had spread, and they too were all sold out. 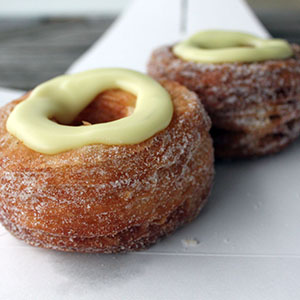 And so to the Cronut, sitting in my fridge in a gold box. I took it out on the balcony with a cup of tea and a view of downtown, and ate up all the love.

This entry was posted in Uncategorized and tagged Cronut, love, obsession. Bookmark the permalink.

One Response to Cronuts