Plum and apple pie, and a wedding to remember. 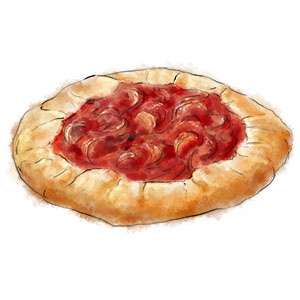 Our good friends Karen and Ronnie had recently returned to Sweden to get married on the edge of a lake in front of family and friends.

“It was a great wedding,” said Karin, narrating us through the photos of glamorous blond people partying by a lake, drinking champagne, and pinning flowers in their hair.  “It really was the best day of my life! We had strawberry cake, people had a great time, there was dancing, and my aunts went skinny dipping.”

Back in New York, we celebrated love and tradition in the best way possible: with pie.

I love making these open-face, rustic pies, partly because they’re super easy, and yield high reward, and partly because I like the aesthetic – jumbled summer fruits, easy pulled-together crust.

2 cups flour
¼ cup sugar
½ tsp salt
1/2tsp cinnamon
2 sticks cold butter
¼ cup water (you might need up to ¼ cup more)
fruit – about a cup to a cup and a half once chopped
Good combinations:
Peaches and raspberries
Apples
Apples and blackberries
Plums and apples
Apricots and raspberries
Peaches and blueberries
Pears
A few tsp of corn flour
2 tbsp of sugar (less if the fruit is really sweet)
¼ tsp cinnamon
¼ tsp ginger

This entry was posted in Uncategorized and tagged apple, easy, pie, plum, wedding. Bookmark the permalink.

2 Responses to Plum and apple pie, and a wedding to remember.