The last of the Christmas Chocolate 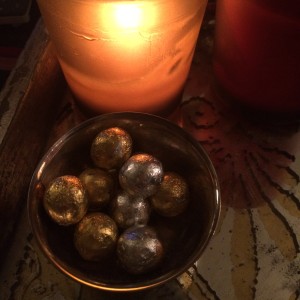 Apparently no couple is above domestic drudgery: Kanye West and Kim Kardashian spent two late nights last week cleaning out her wardrobe to match her “2015 vision”.

Admittedly, not a task that resonates with my life – I can just imagine Jon and I sitting down with a spreadsheet to discuss my 2015 wardrobe vision. All the time, Jon looking at me patient, yet bemused, before he helps me locate and throw away the 2 cardigans with holes in the cuffs, and the purple dress that I bought in 2010 and have never worn because it makes me look like an extra in Beetlejuice.

Instead, our domestic tasks – for what feels like weeks now – center on getting pine needles out of everything. Our once reliable hoover is now tetchy and disobedient. We charge it up over night and it manages one square foot of carpet before bleeping and giving up. We brush. We pick our rug like a mother orangutan with fleas, and yet the needles persist. I’m pretty sure I’ve picked up more needles at this point than were ever on the Christmas tree to begin with.

In fact, that’s probably what Kim and Kanye are doing – avoiding picking up needles by re-organizing the wardrobes.

It’s time to dig into the last of the Christmas chocolate, as the reality of January emphatically begins to hit home.