Nick had intended to propose while standing on the viewing deck on top of the Eiffel tower at sunset. Secrecy was key. She had no idea. 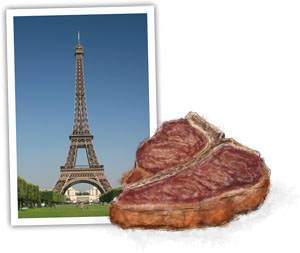 Heâ€™d been paying attention to whether she preferred gold gold or white gold or rose gold and discovered that she in fact preferred platinum, then heâ€™d spent many a long week trying to subtly discover which cut of diamond she might prefer, eventually taking her for a walk up Fifth Avenue hoping that heâ€™d sense a vibe. It went better than he could have hoped for really. Sheâ€™d pointed to one in Tiffanies and sighed dreamily something along the lines of thatâ€™s the perfect engagement ring. Who could say no to a ring like that! The ring was in his pocket. The lift was cranking up to the viewing deck, Paris spread out beneath him. This was it.

Jen had known about the planned engagement, well, maybe knew was too strong a word, suspected strongly about the engagement, ever since he announced the trip to Pairs bookended onto a holiday in London to attend a wedding of a college friend. The walk-by jewelry shops had been a strong hint too, of course. So she had prepared. She was wearing the dress that she had purchased specially and with much excitement from her friends, that was perfect to get engaged in. And now, as the lift juddered to a halt at the top of the Eiffel Tower she felt a shiver of excitement run through her. The sun was setting. This was surely it.

But as Nick looked down at the dizzying drop to the plaza below, crammed with cartoonists, ice-cream sellers and men making animals out of balloons he began to wonder if this really was the best place to propose after all. He remembered reading in a guide book somewhere that if a person dropped and M & M off this balcony and it hit a person below it would kill them instantly. If an M & M could do that kind of damage, what might a carat worth of princess cut diamond do? What if he got down on one knee, took out the ring and dropped it and killed someone and ended up both Not Engaged and In Prison? It was a thought.

So Nick tried to propose outside Notre Dame at dusk, but a coach load of bored Spanish teenagers scupperered that. Then he thought about proposing on the bridge â€“ just as a rubbish barge hove into sight around the bend of the river. Heâ€™d find somewhere better.

Meanwhile, Jen was seriously beginning to wonder if sheâ€™d made some kind of mistake. I mean, the signs were there; Paris, five year anniversary, moved in together 3 years ago, owned mutual furniture â€¦ But Nick continually stopping and looking sick and striding off from one tourist attraction to another was wearing thin. Maybe heâ€™d changed his mind about proposing. Maybe wearing the propose to me dress had jinxed everything. By the time they got the restaurant sheâ€™d all but given up.

Which, of course was the moment when he began his proposal, down on one knee on the tessellated tiles, getting as far as â€œwould you do me the great honorâ€ before a waiter interrupted to take their order for entrecote.

This is the dinner that I cook Jonathan for any anniversary / birthday / New Years Eve where he gets a say in the menu choice. I was told, possibly apocryphally, that doctors in France are able to prescribe red wine, steak and spinach to people who are depressed. Possibly the iron boost helps on a chemical level, but more probably, can there be any other food stuff more likely to engender a spirit of hopefulness and happiness?

It was our wedding anniversary this week, and this was the dinner. I recommend it to you without hesitation.

A T-bone steak is perfect for sharing, with its tender fillet on one side and tasty strip on the other. 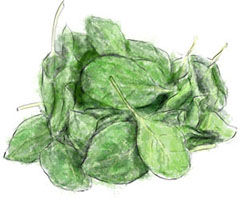 This entry was posted in This Dinner Will Get You Laid and tagged beef, champagne, cream, recipe, spinach, steak, t-bone. Bookmark the permalink.