The Wednesday Tipple â€“ Chardonnay, (with truffled mushroom bruschetta) and a meditation on micro pigs

Jonathan does not believe in Micro Pigs. 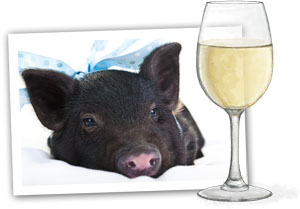 I saw one a few weeks ago being carried in a Louis Vuitton by a fancy Park Avenue type lady, appropriately enough, on Park Avenue. He was beaming out at the world in that way that pigs do, all beady eyes and curly tail and downy pinkness. He was about the size of a smallish rabbit, and quite the most adorable thing Iâ€™d seen in ages.

I cooed at him.

But despite this overwhelming evidence Jon is not convinced. Apparently theyâ€™re a pet shop gimmick that their easily duped owners will regret once they start to grow. And as for photographic evidence; are they actually small pigs or are they really large pigs standing a long way away?

Like Republicans convinced Obama was not born in America, Jon cannot be swayed. And no amount of clapping a la Peter Pan will convince him.

The only thing to do when faced with such stubbornness â€“ pig headedness if you will â€“ is to pour a drink.

And to go with this mild early autumn weather, chardonnay is my booze of choice.

And so from micro pigs to truffles.

On a slight tangent, do you think that if a micro pig should be abandoned in the middle of Whole Foods it would resort to type and seek out the bottles of truffle oil?

I am a truffle fanatic, and a believer in truffle oil, undaunted by being in a kitchen where someone once smashed a bottle. The smell lingered for months. Top Tip: donâ€™t drop truffle oil bottles.

That aside, itâ€™s a great (cheaper) way of adding the incomparable scent of truffles to a dish if used sparingly â€“ too much and you might as well be licking a micro pig that recently rolled in mulch.

When Jon and I lived in Warsaw a lady would arrive outside our apartment every day with a basket. Sometimes sheâ€™d be selling a dozen eggs. Sometimes apples or nuts or smoked cheeses. But every so often she would have a harvest of mushrooms from the forest, often in bizarre shapes and colors, from slipper pink to conker brown.Â  This is my favorite way to cook them â€“ a creamy autumnal tangle on a crunchy toast.

1 French baguette
1 cup of mushrooms â€“ a mixture of wild mushrooms would be fantastic, but failing that, some oyster mushrooms and some button mushrooms are a good combination 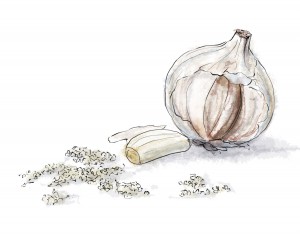