This is a dish that keeps on giving through the week. Hereâ€™s my thinking:

Roast the chicken today and let the warm spiced cinnamon and sweet oranges make the kitchen smell like something out of the Arabian Nights. Eat some cous cous sprinkled with jeweled pomegranates alongside and itâ€™s a dinner fit for Sheherazade herself. 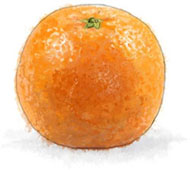 Then prolong the pleasure by turning todayâ€™s leftovers into tomorrowâ€™s feast. Iâ€™m planning on making flatbread sandwiches. Warm a flatbread for a few minutes under the grill. Smear some humus or Greek yoghurt in the middle, top with the chicken, some fresh parsley, some cucumber strips (use a vegetable peeler) a pinch of paprika and a squeeze of lemon. Roll up and munch.

And into the week; a salad of cold chicken, slices of oranges, a handful of black olives, spinach and a dressing of olive oil and orange juice, with some leftover flat bread brushed with olive oil, chopped into cubes and toasted in the oven to make croutons. 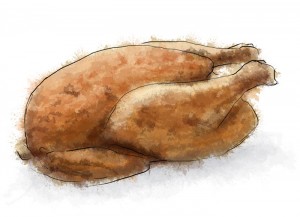 This recipe originally appeared with a discussion on the end of a New York summer.

4 Responses to Roast Chicken with Oranges