Hereâ€™s what I am thankful for this year: I did not take my mother and my aunt to naked ballet. Â

Rewind a year. Mum and Aunty Jen come to stay.Â We scour Time Out for things that wonâ€™t cost as much as a Broadway show / a weekâ€™s rent / a small second hand car to entertain them.

This is what we spotted: â€œTake a chance on experimental dance. $10.â€ We should have known better.

The curtain rose to reveal, interestingly, that Britney Spears would be portrayed by a man. Also, he would be followed around by a person – man or woman, it was impossible to tell – in a bear suit. After a bit of waltzing, contorting and swaying, the bear dragged on a small trampoline. Britney bounced on the trampoline. And thatâ€™s when things took a bit of a turn.

Britney let out a heartrending cry, and took off all his clothes, right down to a g-string made of sweets. Then, climactically, mid bounce, he pinged it off, scattering us all with crotch candy, some of which landed in Jonâ€™s curly hair, not to be discovered until the following morning.

Now my mother does not have the worldsâ€™ greatest eyesight. No matter, she makes up for this with front row seats and binoculars. Naked Britney phases her not one jot. She continues to use her binoculars. After a few moments, my Aunty Jen leans over and borrows them. They both start to giggle. Beside me I can feel the heat radiating from my husbandâ€™s blushing.

Itâ€™s a tribute to the mental fortitude of dancers that Britney stays on stage and finishes the act, which involves vampires for some reason and a lot of blood, only by this point we are immune to theatrics and hardly notice when someone throws a sheepâ€™s kidney on stage.

In a city like New York where we mostly exist on a tangle of noodles with a side of lemongrass and quinoa salad for a bit of variety, itâ€™s no great surprise that people are ridiculously thankful to be given a roast. This is the kind of comforting dinner that sooths even the most g-string candy pinged upon soul. And itâ€™s a good Thanksgiving feast if you happen to be planning a dinner a deux. 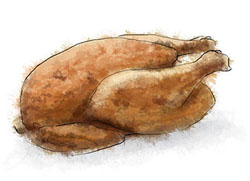