The Monday Treat – Tandoori chicken with a yogurt pomegranate raita 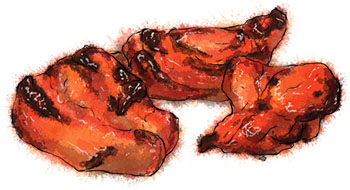 The Royal wedding is over. No more dress speculation, no more gossipy documentaries, no more newspaper specials and magazine picture spreads. No more wearing the QVC ring in public without looking a bit odd. Itâ€™s such a downer. A double downer for me since â€“ the Other Wedding is over too.

Helen and Chris got married! The bride looked exquisite. It did not rain. My Grandma cried in a happy way. People wore hats. Adorable Baby Emily was adorable. I ate a lot of fruit cake. It was a fabulous day.

What to do after a weekend of such excitement? Of scones and tea and cake and toast and chicken and salmon and other old school Bristish delicacies? Go out for a curry, of course.

When I was 17 I went to Calcutta to work in a school run by an NGO. But rather brilliantly, my trip coincided with several bank holiday weekends, a public holiday, a founderâ€™s day holiday and a power cut, so I had more time off than I could have imagined â€“ more time to explore the markets and eat masala dosas. By the time I came home, I was addicted.

My father and I, aided and abetted by the rest of the family, began a comprehensive survey of Indian restaurants, focusing our search in Tooting, where we tracked down our favorite food to a restaurant decorated by a believer in brown near St Georgeâ€™s Hospital, where the diners are supervised by a mannequin dressed in a traditional green mask, headdress and appropriate flourishes. Several years later, my sister rather handily moved in across the street.

This â€œtandooriâ€ chicken is not actually tandoori chicken at all â€“ unless you happen to have a tandoor clay oven in your apartment, in which case, I take it all back, your chicken is tandoori. But this spice-scentedÂ meat is what I make in New York when I want to evoke memories and shake things up a little.

8 boneless chicken thighs
150g pot of natural yoghurt (low fat is fine)
1 tbsp masala curry paste (or you can make your own, see below)