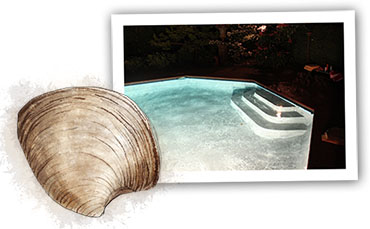 It was only early evening, but already conversation had taken a turn to the surreal. â€œSo I thought, seriously, can there be any better way to spend a bachelor party than to go to Spain and run with the bulls?!â€

We were at Jessâ€™s uncleâ€™s magical house in the Hamptons, eating a clambake that her mother had won in a raffle, and drinking gin and tonics as the sun set over the pool.

â€œDid you sleep ok?â€ Jess wondered, as the question of the appropriateness of bull-running hung in the air un-addressed. â€œYou didnâ€™t hear any strange noises?â€

â€œBecause if you noticed anything like that it was probably just the ghost,â€ said Jess.

Later, lying on the patio looking up at the sky, Jon pointed out the Milky Way, dusting the sky in a great arc above us. We were tiny specks of dust on a tiny planet, circling round a sun as tiny as the grains of sand weâ€™d shaken out of our beach shoes that afternoon. We all felt it as we started at a sky full of stars. Bull-running was no longer surreal. Ghosts were no longer surreal.

Eventually a voice broke the silence: â€œItâ€™s totally weird that we eat lobsters isnâ€™t it. Just think about it. Look at them. I mean. Really.â€

It was that kind of night.

The truth is, if youâ€™ve brought your date to your house in the Hamptons and had an afternoon of cocktailing around the pool, you could probably cook toast for dinner and still get laid, as long as both of you have been careful with the sunscreen. But this clam bake is perfection, perfect for a party, and easy to assemble in layers in a large pot.

3 large onions
1 Â½ lb small potatoes (if some are larger than other, cut them in half â€“ you want everything to be about the same size to cook evenly)
4 corn cobs
40 little neck clams and or steamer clams (scrubbed clean) 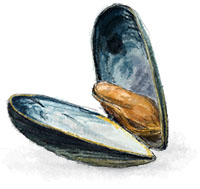 This entry was posted in This Dinner Will Get You Laid and tagged beach, clambake, Hamptons, littleneck clams, lobster, mussels, potatoes, shrimp, stars, wine. Bookmark the permalink.