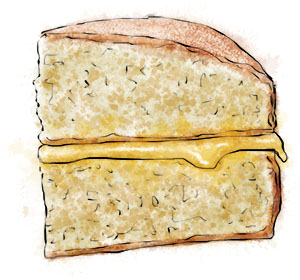 Perhaps it started when Ken and Carrie decided to celebrate both their birthdays and a wedding anniversary with a cake buffet at rotating restaurant The View;

â€œWhat’s that you say?Â  Too touristy?Â  Shudder to think of navigating the Marriott Marquis’ myriad elevators?Â  Come on, we promise the sunset view from the Big Apple’s only rotating roof-top restaurant will turn your New Yorker cynicism into wide-eyed wonder.â€

It was great. We rotated, and ate cake, and felt grateful for air conditioning on a day that reached heights of 103; â€œDid you see the guy in Times Square dressed as Elmo? Worst job in New York. Absolute worst.â€

Or maybe it was triggered by Butterlane introducing their summer icings, which drew me to the East, filled with hopeful expectation, ready to sample, kinda like a reverse wise man. (all delicious, BTW) 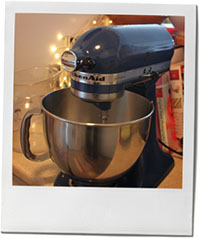 And then my Grandma sent me some money, which I added to the coffee jar where Iâ€™ve been saving on an ad hoc basis to buy a Kitchenaid mixer. Iâ€™ve wanted one for years, but always worried about how expensive they are, how much room they take up, how heavy they are to lift if you have to store them in the bathroom closet (New York Living strikes again). But Macyâ€™s had a sale, and that was that.

Itâ€™s blue, itâ€™s beautiful, and it makes cake-making easy. So easy cakes are what I have been making.

This lemon cake reminds me of the kind of lemon drizzle cakes that my friend Charlotte and I would share at university. Weâ€™d start off with just the one slice, and a cup of afternoon tea. Then maybe a little sliver more, and another cup of tea, and another half hour chat, until, little sliver by little sliver, weâ€™d devoured the whole thing, not got any work done, and had to dash for choir and evensong.

I usually use good quality shop bought lemon curd for this cake, but if you want to make your own, I use Deliaâ€™s recipe, and I really recommend it.

For the lemon curd cream