There are a few foods that inspire absolute devotion from my friends. Bacon is one, Nutella is the other. Since neither of these are difficult to provide, I suppose I ought to opt for an easy life and serve nothing but blts at my parties, and ramekins of Nutella with teaspoons.

Thereâ€™s an Italian supermarket in Chelsea market that sells some of the best pancetta in the city, as well as Nutella in jars the size of buckets. Sometimes I go in just stare in awe and wonder.

Separately, there can be few finer food stuffs. But together? Opinions are divided, though not my opinion – I think they’re horrible.

A few weeks ago a friend of mine invited me to her new boyfriend’s gallery opening in Soho, so I put on my best little black dress and headed out into the sauna that in New York in the summer. All anyone really wanted to do was suck ice cubes, but there was warm champagne, so people made the best of it, paying particular attention to the paintings directly underneath the air conditioner. And then the canape came out. It was a rasher of bacon, covered in chocolate and scattered with hazelnuts. A bacon deconstructed Nutella.

To say they were a hit would be an understatement. People whipped them off the trays as though they were lottery tickets. Even extremely skinny women with Mohawks and nose rings who looked like they hadnâ€™t eaten since the death of Atkins were scarfing them up with every sign of enthusiasm.

In my opinion, it was not good.

Thereâ€™s something about cold bacon fat thatâ€™s not massively appealing in any case â€“ hot bacon fat, whole other story, but cold? No. And how could cold fat be improved by the addition of chocolate and nuts? It was all 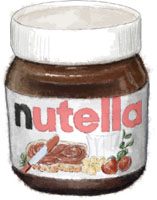 too emperorâ€™s new clothes for my tastes. But clearly, at this party I was in a minority of one.

So, putting the kitchen aid mixer through its paces, I decided to make a Nutella themed cookie â€“ chocolate chunks, hazelnuts and Nutella swirl. But if you wanted to be artsy and adventurous you could add Â¼ cup of cooked crispy bacon (chopped and cooled). I donâ€™t and wonâ€™t, but you do as you please.

Happy baking days playing with the new mixer continue despite the heat wave that’s currently settled over NYC, and happy experimentation – the Nutella cookie is born. 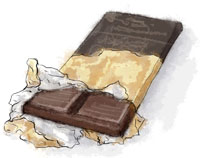 This entry was posted in The Wednesday Tipple and tagged chocolate, cookies, hazelnuts, milkshake, nutella. Bookmark the permalink.